I contributed some thoughts about cultural appropriation to the excellent Aesthetics for Birds blog. To check it out, click here.

Comments Off on Post on Aesthetics for Birds Blog |

Following a recent brief conversation with Sam Liao at the Race & Aesthetics conference, I realized we took very different views of the relationship between certain kinds of moral properties and their aesthetic upshot. We were discussing a couple of paintings in the Leeds Art Museum where the conference was taking place, one of which was Edward Armitage’s Retribution. As it happens, Sam has discussed the painting elsewhere in a recent blog post:

Learning about the museum’s collection from a postcolonial perspective actually heightened my aesthetic experience of them, albeit in unexpected ways. For example, a painting that I’ve long casually dismissed as an amateurish allegory actually became more interesting to me when I learned it was part of the British propaganda to justify their horrific actions in India. The painting featured a white angelic figure slaying the Bengal tiger. It is not the subtlest of all symbols, which makes it rather amateurish as an allegory, but perfectly appropriate as propaganda. What was previously an aesthetic flaw somehow ceased to be one, even though the painting is certainly more morally flawed for it. 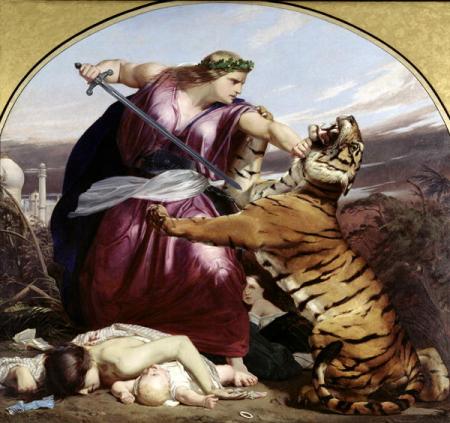 The “white angelic figure” (“demonic” seems more apt) is Britannia. Retribution was painted to celebrate the (brutal) crushing by the British of the Indian rebellion of 1857-8, in which Indian sepoys working for the East India Company engaged in a mutiny, leading to a number of others and, eventually, the dissolution of the East India Company. Crucially, for the remainder of the discussion, the fact that Retribution celebrates this Imperial bloodbath renders the painting morally flawed (in case that was not obvious).

But my ultimate interest is not in Sam’s position (or, rather, the one I have attributed to him). Instead, it is with the ethicist’s. So, even if you side with Sam, never fear—the preceding discussion still throws up an interesting consequence. Namely, if our positions (mine and Sam’s) concerning Retribution and works like it are exhaustive (whether of logical space or just its plausible positions), then this by itself provides an argument against ethicism (and thereby one for aesthetic immoralism). Let me explain.

If one of us must be right, then there are two possibilities. The first possibility is that Sam is right. If so, then the argument against ethicism is straightforward; it is simply “his” argument for aesthetic immoralism as spelled out above.

The second possibility is that I am right. If so, then we can mobilize a burden-of-proof argument against the ethicist. For, in order to make her argument, the ethicist relies on the fact that ethical properties in artworks will never flip their aesthetic valences. So, to use the earlier example, being cruel will always count as a pro tanto aesthetic blemish in a work, (and similarly, being beneficent will always count as a pro tanto aesthetic merit). But if a notion as seemingly robustly univalent as interesting—or even interesting as art—can flip its valence as my argument claims, then the ethicist must answer a question: namely, what is so special about ethical properties in artworks that they never flip their valences? The challenge here is simple: if all properties of artworks can flip their aesthetic valences, why not the moral ones?

Philosophical Thought Experiment as a Genre?

A recent post by Brian Weatherson over at the Arche Methodology Project Weblog raises an interesting idea: can philosophical thought experiments be treated as a genre like, say, science fiction? This idea is also explored in Jonathan Weinberg’s article “Configuring the Cognitive Imagination” in New Waves in Aesthetics. Weinberg spells out the idea, without endorsing it, on page 214:

Yet, what if philosophical thought experiments were a genre—at least in the sense that engaging in them successfully requires mastery along the same lines as I have sketched for the mastery of literary genres? There are rules to engaging properly with a hypothetical scenario, after all. To make just some of the more obvious generalizations about our imaginative practices with thought experiments: one should embellish as little as possible; generally it is a practice conducted in an affectively `cool’ manner; and our inferential systems must often be brought to bear in this particular sort of imaginative project as well. And there are surely other, and more subtly articulable, rules for the proper performance of thought experiments still to be detailed.

While I was initially attracted to the idea—especially given my interest in imagination, fiction, and genre—I now think that it won’t do, on the more interesting interpretation. Roughly, the idea is to treat philosophical thought experiment as a genre relevantly similar to other genres of fiction. I have two worries with the idea, interpreted thus. In this post, I’ll press the first worry: we engage with philosophical thought experiments relevantly differently from the way we engage with fictions in other genres.

END_OF_DOCUMENT_TOKEN_TO_BE_REPLACED

In this post, I reply to my previous post on a new motivation for positing desire-like imagination. The right response to the argument sketched there, I now think, is a combination of `Who cares?’ and `What are you talking about?’. But there’s a functionalist explanation behind the indifferent shrug and the incredulous stare.

END_OF_DOCUMENT_TOKEN_TO_BE_REPLACED

Take as the starting point the analogy at the beginning of this post: desire-like imagination is to desire as (belief-like) imagination is to belief. There is a tradition of differentiating belief and desire by their “directions of fit”. Belief is said to have a mind-to-world fit: the aim of belief is to represent a fact about the actual world. Desire is said to have a world-to-mind fit: the aim of desire is to make the world as the non-actual state of affairs represented. Arguably, we can also say that imagination has a direction of fit, at least when we are exercising the faculty in pretense or engagement with fiction. Imagination, I want to claim, has a mind-to-fictionality fit: the aim of imagination is to represent a fact about the (relevant) fictional world. The relationships between belief, desire, and imagination are summarized by the following table:

END_OF_DOCUMENT_TOKEN_TO_BE_REPLACED

This is the first, hopefully, in a series where I air out some thoughts after the aesthetics discussion group. Last Friday, our comrade Ian Flora presented ‘Canon, Fanon, and Fiction’, a paper that aims to explores the relationship between canonical fiction worlds and worlds of fan-fictions. I will only try to bring out the issues and raise some questions I find interesting. To know Ian’s view, you’ll have to ask him. I also have some view, but you’d have to buy me a beer to hear them. (And for them to make sense, you should buy yourself a keg.)

Roughly, we are interested in the relationship between canon and fanon, and what fits under those terms. To borrow Ian’s example of Harry Potter, canon is what officially happens in the Harry Potter books by Rowling and Movies, and fanon is what the fans accept as true as a result of fan-fiction. Note that neither canon nor fanon needs to only contain the propositions that are specifically mentioned in the story, but just what is reasonably implied. We may use the fictional world terminology loosely to talk about the what is true or implied true by the fiction. For example, the true propositions given by the Harry Potter stories compose the Harry Potter world; the true propositions given by the Harry Potter stories and a series of fan-fictions F compose the Harry Potter sub-F world. Notice I am also being rather sloppy in not distinguishing the world given by a fiction and the world that we imagine when we access a fiction. This is of course an important distinction that needs to be drawn out in the full account. For the sake of simplicity and interest, let’s continue with the sloppy intuitive notions and start asking some questions: